Bilal Saeed once again brings an other amazing song with his new record label ‘One Two Records’ this time featuring Roach Killa and Izzat Fatima. After the massive hit ‘Baari’ by Bilal Saeed and Momina Mustehsan, this is Bilal’s second song which he has written, directed and composed under his self owned One Two Records. The video of ‘Chaskay’ features model/actress Sabeeka Imam with Bilal Saeed.
#Chaskay is all about how to keep love alive in the times of COVID-19, a global tragedy that has forced us into isolation; So that when you emerge from this challenging time, you might be surprised at how much you’ve grown together — rather than apart. 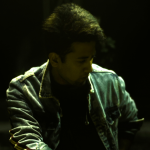 Mansha Pasha looks chic as she dons a classic whit

For all the movie lovers out there! Now you can wa

Hania Amir trending on twitter after her 9 secs of